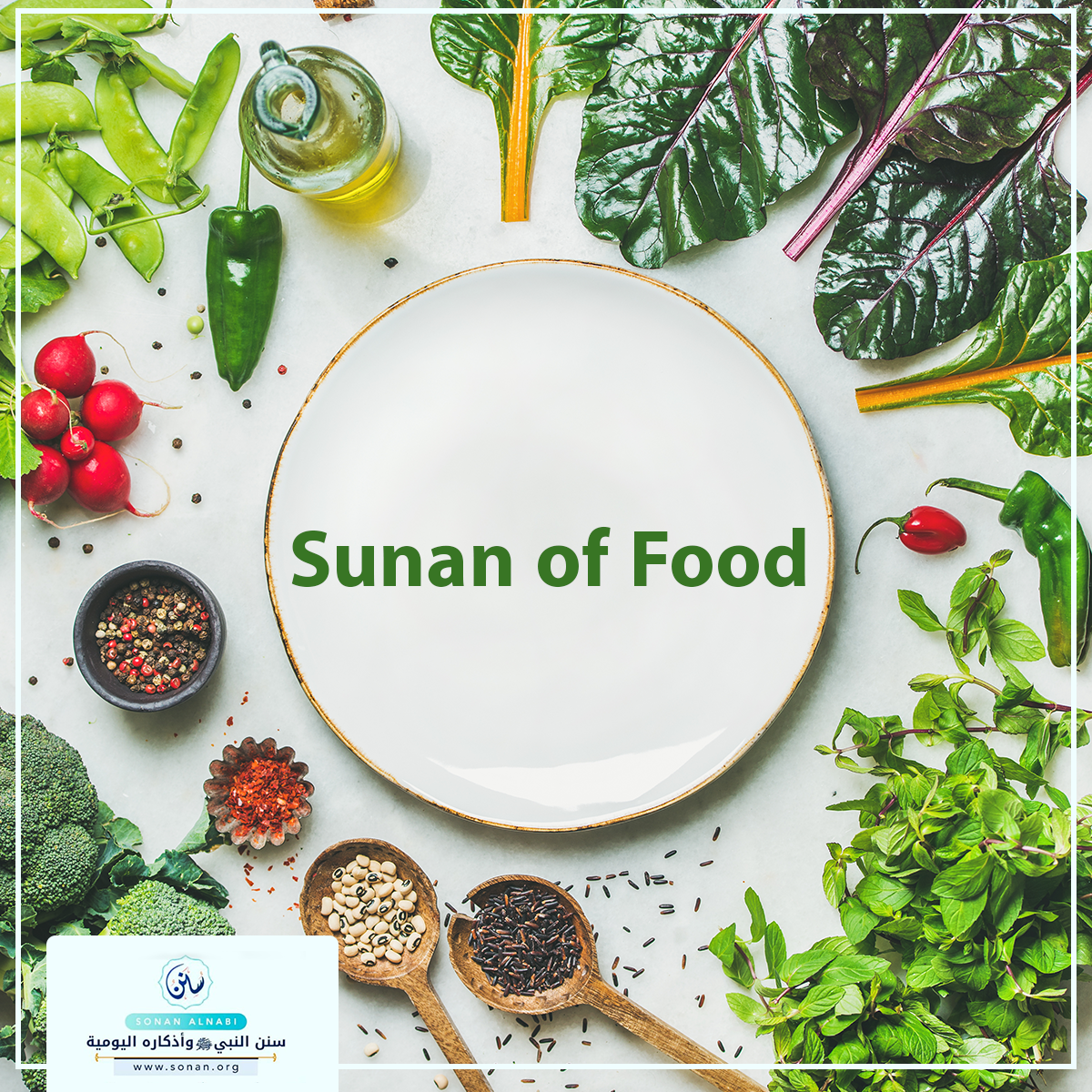 1) Saying “Bismillāh” (In the name of Allāh) before eating or drinking.

If a person forgets to mention Allāh’s name at the beginning of eating, when he remembers he should say, “In the name of Allāh for its beginning and for its end.”

‘Ā’ishah, may Allāh be pleased with her, narrated that the Prophet (PBUH) said,

“When one of you eats, he should mention Allāh’s name (i.e. say Bismillāh). If he forgets to mention Allāh’s Name at the beginning, when he remembers he should say, ‘Bismillāhi Awwalahu wa Ākhirah’ (In the name of Allāh for its beginning and for its end).”

This Hadeeth also indicates that a Muslim should eat using his right hand so he would not resemble Satan. Thus, if one did not say “Bismillāh”, or ate with his left hand, he would resemble Satan.

Moreover, satan is eager to enter homes so he can spend the night and share the food and drink of people.

“When a man enters his house and mentions the Name of Allāh upon entering and upon eating, Satan says (addressing his followers), ‘You will find nowhere to spend the night, and you will find no dinner,’ but if he enters without mentioning the Name of Allāh upon entering, Satan says to his followers, ‘You have found a place to spend the night, as well as dinner.’.”

2) Eating from what is nearest to you.

This is proven by the Hadeeth of ’Umar Ubn Abi Salamah (ABPWH) mentioned earlier, narrating the advice given by the Prophet (PBUH) to the young boy saying,

“… and eat from what is nearest to you of the dish.”

3) Picking up any piece of food that has fallen, cleaning it, then eating it.

Jābir Ubn ‘Abdillāh (ABPWH) narrated that he heard Allāh’s Messenger (PBUH) saying, “Satan is present with every one of you in all of his matters, including when one of you eats, so when a piece of your food falls on the ground, pick it up, remove any of the dirt on it, and eat it in order not to leave it for Satan, and when you finish eating lick your fingers, for one of you does not know in which portion of the food the blessings lie.”

One who contemplates this Hadeeth will find Satan eager to share with man all of his affairs in order to spoil his life and make it void of blessings. What indicates this is the part of the previous Hadeeth that says, “Satan is present with every one of you in all of his matters ...”

4) Licking the fingers after eating.
This means to lick the thumb, index finger, and middle finger with the tip of your tongue, or have one’s wife do so. In fact it is Sunnah to avoid wiping one’s fingers with a tissue or cloth before licking them.

“When one of you finishes eating, he should not wipe his fingers until he has licked them or let someone else lick them.”

5) Cleaning the dish.
This means to clean the dish by eating every piece or stain of food therein and not to leave anything. For example, when rice is served, every last grain of it should be eaten, as the blessings may lie in these remains. This applies in case it is not intended to keep the remaining food for later consumption.
What proves this is the following Hadeeth:

“The Prophet (PBUH) ordered us to clean the dish.”

In another narration by Muslim,

“Every one of you should clean his dish.”

Shaykh Ubn ‘Uthaymeen, may Allāh have mercy on him, said, “This means to take the little traces of food that stay behind with your fingers and lick them. Unfortunately, this is one of the Sunan that many people have abandoned, even some of the knowledge seeking students who are for sure aware of this Sunnah.” (Sharh Riyādh Is-Sāliheen, 2/1069)
6) Eating with three fingers.
It is Sunnah to eat using three fingers; the thumb, the index finger, and the middle finger, especially with things that can be picked up easily with three fingers, like dates, etc.

This is proven by the following Hadeeth: Ka’b Ubn Mālik (ABPWH) said,

“The Prophet (PBUH) used to eat with three fingers, and he would lick them before wiping them.”

7) Taking three breaths outside the vessel during the course of drinking.

This means to drink in three gulps and breathe after each gulp.
This is proven by the following Hadeeth:

The meaning here is that one should breathe outside the vessel, because breathing inside it is disliked as illustrated by Abi Qatādah’s Hadeeth in the Saheehayn, in which Allāh’s Messenger (PBUH) said,

“When one of you drinks from a vessel, he should not breathe in it.”

8) Thanking Allāh, the Almighty, after eating.
What proves this Sunnah is the following Hadeeth:

There are several formulae for praising Allāh, the Almighty, such as:

1) “All praise is due to Allāh; praise that is abundant, pure, and full of blessings. You feed your slaves and provide them, and You are not in need for anyone, nor can Your favors be abandoned or dispensed, O our Lord.”

2) “Praise be to Allāh our Lord, Who has satisfied our needs, and quenched our thirst. You feed your slaves and provide them, and You are not in need for anyone, nor can Your favors be denied, O our Lord.”

9) Gathering to have food.

It is Sunnah to gather for eating, and to avoid eating separately.

It is Sunnah to praise the food if you like it, only with what is truly good about it.

It should be noted that the vinegar they used was sweet, not sour like that we use today.

Shaykh Ubn ‘Uthaymeen said, “It is from the Sunnah of the Prophet that if one likes food or bread, they should praise it. Moreover, it is also Sunnah to mention the name of the family that provided the food that one is praising.” (Sharh Riyādh Is-Sāliheen 2/1057)
One who contemplates the reality nowadays will find that a lot of people not only do they not follow the Sunnah, but they even violate it by dishonoring and criticizing food in many situations. This is against the guidance of the Prophet (PBUH) , as illustrated

in the Hadeeth in the Saheehayn narrated by Abi Hurayrah, who said,

“The Prophet (PBUH) never criticized any food at all. If he liked it, he would eat it, and if he did not like it, he would leave it.”

11) Making Du‘ā’ for the host.
Abdullāh Ibn Busr narrated, “Allāh’s Messenger (PBUH) came to my father and we served him a meal and a dish of dates, cheese, and butter. He ate from them, then he was given dates, which he would eat and place their stones between his fingers, and join his forefinger and middle finger.

A drink was then brought to him and he drank it. He then gave it to the one who was on his right side.” The narrator said,

“My father took hold of the rein of the animal he used to ride and requested the Prophet (PBUH) to supplicate for us. Thereupon he said, ‘O Allāh, bless them in what You have provided them with as sustenance, forgive them, and have mercy upon them.’.”

12) Offering water to others, starting first with the one on the right hand side.
After one drinks, it is Sunnah to pass on the vessel to someone on his right side.

13) One who serves water to the people should be the last one to drink.

It is Sunnah for one who drinks milk to rinse his mouth after finishing drinking so that no trace of fat will be left in his mouth. Ibn ‘Abbāss (ABPWH) narrated,

“The Prophet (PBUH) drank some milk and then asked for some water. He rinsed his mouth and said, ‘It contains fat.’.”

Jābir Ubn Abdillāh, may Allāh be pleased with them, narrated that he heard Allāh’s Messenger (PBUH) saying,