Sunan of Greeting, Meeting, and Gathering

Sunan of Greeting, Meeting, and Gathering 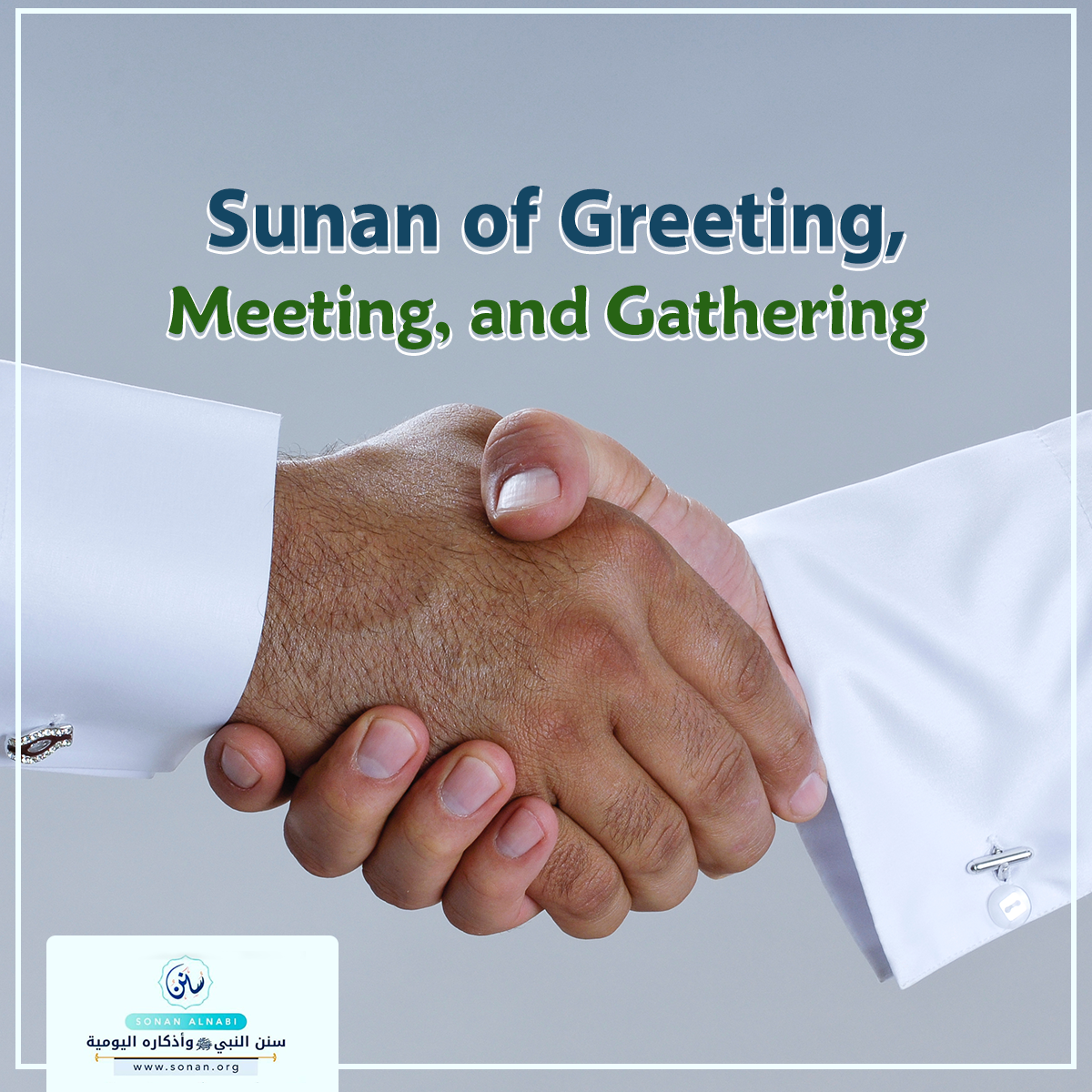 1) Greeting others with Salām (The greeting of peace).

There are numerous narrations that indicate this Sunnah.

“The duties of a Muslim towards other Muslims are six.” The Prophet (PBUH) was asked, “Allāh’s Messenger, what are these?” He answered, “When you meet him greet him, when he invites you accept his invitation, when he seeks your advice give him advice, when he sneezes and says, ‘All praise is due to Allāh,’ reply to him, ‘Yarhamuk Allāh’ (i.e. may Allāh’s mercy be upon you), when he falls sick visit him, and when he dies follow his funeral.”

Replying to the greeting of Salām is obligatory.
Allāh, the Almighty, says, “And when you are greeted with a greeting, answer with a better greeting, or at least return it equally. Verily, Allāh keeps account indeed of all things.” (Soorat Un-Nisā’)
An order from Allāh or the Prophet (PBUH) originally means it is for obligation, unless another authentic proof proves otherwise.
Agreement of all scholars on the obligation of replying to a Muslim’s greeting has been reported by several scholars, some of which are Ibn Hazm, Ibn ‘Abdil Barr, Shaykh Taqiy Ud-Deen, and others, may Allāh have mercy on them.
The best formula of the greeting of Salām and response to it is, “May peace, the mercy of Allāh, and the blessings of Allāh be upon you.”
Ibn Ul-Qayyim, may Allāh have mercy on him, said, “The Prophet’s Sunnah when greeting someone is to complete this formula to the very end where it says, ‘... wa Barakātuh.’ (i.e. and the blessings of Allāh be upon you).” (Zād Al-Ma‘ād 2/417)

Spreading Salām among people is Sunnah. In fact it is an assured Sunnah that is greatly rewarded, as mentioned in the Hadeeth narrated by Abi Hurayrah (ABPWH) , that Allāh’s Messenger (PBUH) said,

2) Repeating Salām three times if needed.
This is only valid in some cases, like when there is doubt whether the other person heard your greeting or not, in which case it is recommended to repeat it up to three times. Another example of this would be when there is a big gathering and only those in close vicinity hear the greeting, so repeating it is recommended up to three times in order to have all people hear.
This is proven by the following Hadeeth:

“When the Prophet (PBUH) used to speak, he would repeat his words three times so people could understand him, and when he used to meet a group of people and greet them, he would greet them three times.”

It can be concluded from the previous Hadeeth of Anass (ABPWH) , that it is Sunnah to repeat a word twice or thrice if needed, like in a situation where a person talks and he is not heard or understood.

“A man asked the Messenger of Allāh (PBUH), ‘Which act in Islam is the best?’ The Prophet (PBUH) replied, “To give food, and to greet those whom you know and those whom you do not know.”

4) Initiating Salām according to the rules that the Sunnah illustrated.

In another narration that Al-Bukhāriy reported, it says,

There is no problem, however, if someone does the opposite, like if the old greeted the young or if the one walking greeted the one riding, but it is of course better to follow the rules mentioned above as illustrated in the Sunnah.
5) Greeting children and shaking hands with them.

Greeting children and shaking hands with them shows humbleness, gets the children used to this, and raises the value of the Sunnah in their hearts.
6) Greeting those at home upon entering home.
This falls under the general category of greeting others with Salām. It is Sunnah upon entering one’s home to begin by cleaning his teeth with Siwāk (tooth-stick), and then to greet those at home with Salām.

This is the fourth situation in which the use of Siwāk is recommended. ‘Ā’ishah, may Allāh be pleased with her, narrated,

“The first thing that the Prophet (PBUH) used to do upon entering home is using the Siwāk.”

Thus, he used to use the Siwāk first, and then greet his family members.
Some scholars even said that it is Sunnah to say the greeting of Salām upon entering any house, not just one’s home, and that this should be done even if there was no one inside the house, as Allāh the Almighty says,

“So when you enter houses, greet yourselves with Salām, a greeting from Allāh that is blessed and pure. This is how Allāh makes his revelations clear to you so perhaps you may understand.”

Ibn Hajar, may Allāh have mercy on him, said,

“This would be considered to fall under the general order to spread Salām. In a situation when one enters a place where no one exists, he should greet himself according to the instructions of Qur’ānic verse mentioned above.”

From the explanation above, we can conclude that there are three Sunan upon entering home:

1) To mention Allāh’s name, especially at night. This is proven by the Hadeeth in which Jābir Ubn ‘Abdillāh, may Allāh be pleased with them, narrated that he heard the Prophet (PBUH) saying:

“When a man enters his home and mentions the Name of Allāh upon entering and upon eating, Satan says (i.e. addressing his followers), ‘You will find nowhere to spend the night and you will find no dinner,’ but if he enters without mentioning the Name of Allāh, Satan says (to his followers), ‘You have found a place to spend the night, as well as dinner.’.”

2) To use Siwāk, according to the Hadeeth of ‘Ā’ishah, may Allāh be pleased with her, that we already mentioned.

3) To greet the members of the family who are at home upon entering home.
7) Lowering one’s voice when greeting people if some of them are asleep.

That was the practice of the Prophet (PBUH) as mentioned in the narration of Al-Miqdād Ibn Il-Aswad (ABPWH) who said,

“… and we used to milk our animals and everyone would drink his share, and we would give the Prophet (PBUH) his share, he would come later and greet the people with a low voice that would not wake up someone asleep, but could be heard by those awake.”

‘Ā’ishah, may Allāh be pleased with her, narrated that the Prophet (PBUH) said to her,

“Jibreel conveys his Salām to you.” She said, “Peace and mercy of Allāh be upon him.”

This Hadeeth indicates that one who is asked to convey greetings should convey them, like the Prophet conveyed the greeting of Jibreel to ‘Ā’ishah. Moreover, the Hadeeth also indicates that it is Sunnah to send greetings to others with someone.
9) Greeting people with Salām upon arriving at a meeting, and upon leaving.

10) Shaking hands and greeting others with Salām upon meeting each other.
This was the practice of the companions who were very keen to follow the Sunnah.

“I said to Anass (ABPWH) , ‘Was it the practice of the companions to shake hands with one another?’ He said, ‘Yes.’.”

“Do not underestimate any good deed, even if it was just to meet your brother with a cheerful face.”

“Smiling in the face of your brother is a charity.”

“… and the pleasant word is a charity.”

Polite and decent words that people commonly use can be a means to obtain great reward, if just accompanied with the intention of doing charity.
Shaykh Ubn ‘Uthaymeen, may Allāh have mercy on him, said, “Pleasant words are such as saying, ‘How are you?’, ‘How are your brothers?’, ‘How is your family?’, and so on. Such words have an effect of pleasure on the heart of the person to whom they are said. Every pleasant word is a charity and its reward is bestowed by Allāh the Almighty.” (Sharh Riyādh Is-Sāliheen, 2/996, Chapter, “Recommendation of pleasant speech and meeting people with a cheerful face”)

13) Remembering Allāh in meetings and mentioning His name (i.e. praising Him).

“Allāh has angels who go about on roads and paths looking for those who remember Allāh and mention His name. When they find some people remembering Allāh and mentioning His name, they call each other saying, ‘Come to what you are looking for.’.” He added, “The angels then surround them with their wings until the space between them and the lowest sky is fully covered ...”

“Whoever sits in a meeting and utters a lot of prattle, but says before getting up, « سُبْحَانَكَ اللّهُمَّ وَبِحَمْدِكَ أَشْهَدُ أن لاَ إلَهَ إلاّ أنْتَ، أَسْتَغْفِرُكَ وَأَتُوبُ إِلَيْكَ » ‘Glory and Praise be to You, O Allāh. I bear witness that there is no God but You. I ask You for Your forgiveness, and I turn to You in repentance.’, any sins that he may have committed during this meeting will be forgiven.”

(At-Tirmidthiy no. 3433, and it was graded as Saheeh (Authentic) by Shaykh Al-Albāniy, may Allāh have mercy on him.)