Allāh urges us in many verses to have the habit of remembrance of Allāh and mentioning His name (i.e praising Him).

Allāh urges us in many verses to have the habit of remembrance of Allāh and mentioning His name (i.e praising Him). 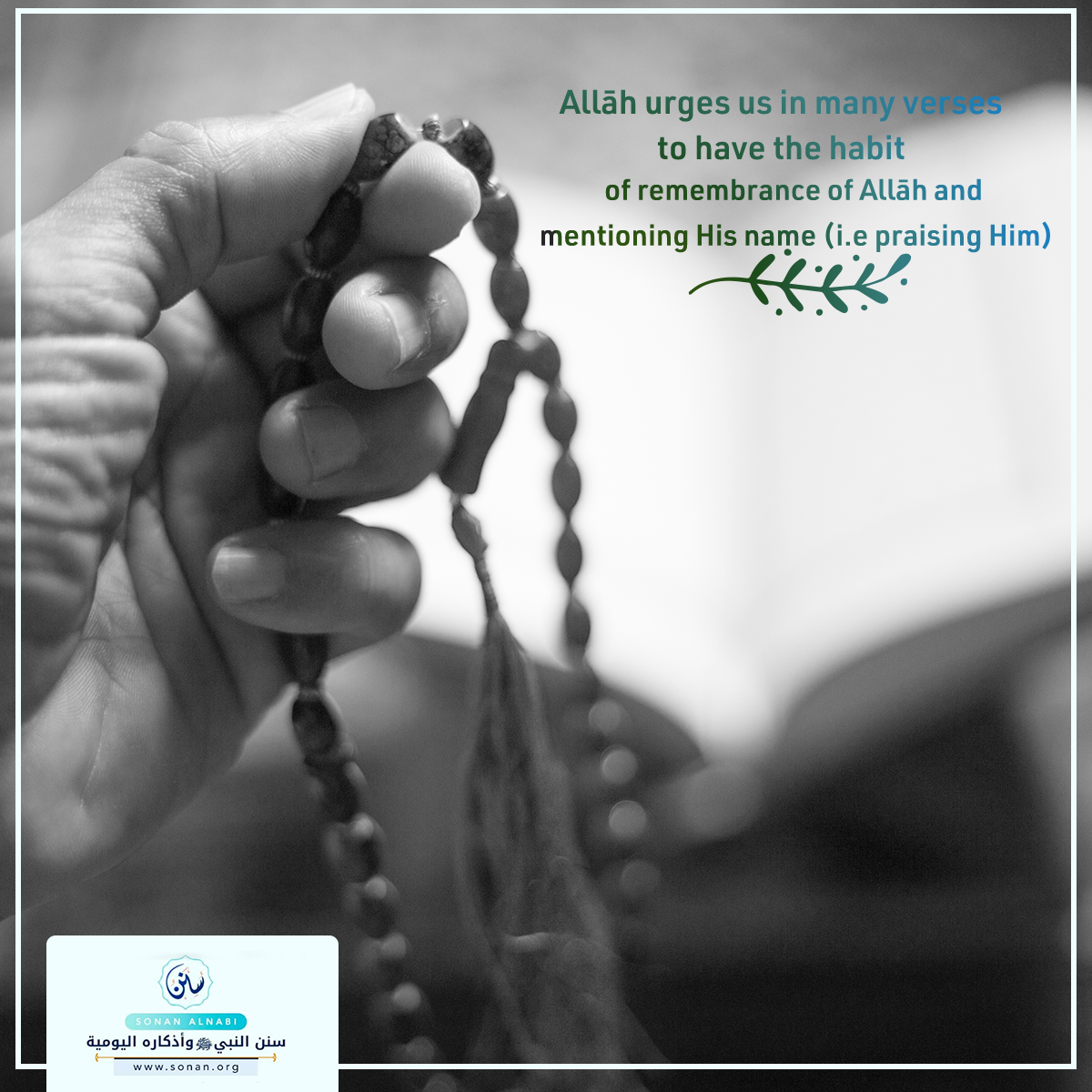 “O you who believe, remember Allāh very often, and glorify Him morning and evening.”

2. Allāh promised to forgive those who remember Him and mention His name, and give them great reward.

“… and those of men and women who remember Allāh often, for all of them Allāh has prepared forgiveness and great reward.”

3. Allāh warned us of being like hypocrites who rarely remember Allāh.

“Verily, hypocrites seek to deceive Allāh, but it is He Who causes them to be deceived, and when they stand up for prayer they do so in laziness, only to be seen by people, but little do they remember or praise Allāh.”

4. Allāh warned us of paying full attention to money and offspring, and forgetting Allāh the Almighty.

“O you who believe, let not your properties or your children divert you from the remembrance of Allāh, and whosoever does that then they are the losers.”

“Thus, remember Me (i.e. by mentioning my name during praying, glorifying, etc.) and I will remember you.” )

Allāh said in the Qudsiy Hadeeth,

“Whoever says a hundred times in one day, “None has the right to be worshiped but Allāh alone, Who has no partners, to Him belongs the kingdom and to Him belong all Praises, and He has power over all things (i.e. Omnipotent),” will get the reward of freeing ten slaves, a hundred good deeds will be written in his account, a hundred bad deeds will be erased from his account, he will be protected from Satan from the morning till the evening, and nobody will be superior to him except one who has done more than that which he has done

‘Subhān Allāh wa Bihamdih,’ (i.e. Glory and Praise be to Allāh) a hundred times a day, all of his sins will be forgiven even if they were as much as the foam of the sea.

“Whoever says, ‘There is no God but Allāh alone, Who has no partner, His is the kingdom and His is the praise, and He has power over all things’ ten times, will get the reward of freeing four slaves from the children of Isma‘eel.”

“We were sitting with Allāh’s Messenger (PBUH) and he said, ‘Is any one of you incapable of earning one thousand rewards every day?’ Someone from the people in the gathering asked, ‘How can any one of us earn a thousand rewards?’ Prophet Muhammad (PBUH) said, ‘By Glorifying Allāh (i.e. saying “Subhān Allāh”) a hundred times, one will be granted a thousand rewards, or will get a thousand sins wiped off his record.’.”

“Whoever says, “Glory and Praise be to Allāh” a hundred times in a day, all of his sins will be forgiven even if they were as much as the foam of the sea.”

In a narration reported by Muslim, Allah’s Messenger r said,

“Whoever says ‘Glory and Praise be to Allah’ one hundred times in a day, none shall come on the day of resurrection with anything better than what he has come with except someone who has said the same or more.”

The Ahādeeth narrating various Adthkār and their virtues are so many. The ones that were quoted above are the most known and the authentic ones. Yet, there are many other Ahādeeth that show the virtues of Adthkār.

‘Shall I tell you about one of the treasures of Paradise?’ I said, ‘Sure.’ The Prophet (PBUH) replied, ‘There is no power nor might except with Allāh.’.”

“Saying ‘Glory be to Allāh, all praise is due to Allāh, there is no God but Allāh, and Allāh is the Greatest,’ is dearer to me than all that the sun has risen upon (i.e. the whole world).”

6.
Asking Allāh’s forgiveness is a type of Dthikr.

“Sometimes I perceive a veil over my heart, and I supplicate Allāh for forgiveness one hundred times in a day.”

This is a deed of Allāh’s Messenger (PBUH). The Prophet (PBUH) also advised us to ask forgiveness,

as reported by Muslim through Al-Agharr (ABPWH) who said, “The Prophet (PBUH) said,

“I swear by Allāh that I supplicate for Allāh’s forgiveness and turn to Him in repentance more than seventy times a day.”

Thus, a Muslim should not forget to continuously ask for Allāh’s forgiveness.
Finally, I would like to conclude the Sunan of Dthikr (and all daily Sunan as well) with the following great Dthikr:

“Two words are light on the tongue, but weigh heavy in the balance, and are loved by the Allāh the Most Merciful, ‘Glory and Praise be to Allāh. Glory be to Allāh, the Supreme.’.”