The Glorious Quran, the Muslims’ religious Scripture, was revealed in Arabic to the Prophet Muhammad, may the mercy and blessings of God be upon him, through the angel Gabriel.  The revelation occurred piecemeal, over a period of twenty-three years, sometimes in brief verses and sometimes in longer chapters.[1]

The Quran (lit. a “reading” or “recitation”) is distinct from the recorded sayings and deeds (Sunnah) of the Prophet Muhammad, which are instead preserved in a separate set of literature collectively called the “Ahadeeth” (lit. “news”; “report”; or “narration”).

Upon receiving revelation, the Prophet engaged himself in the duty of conveying the message to his Companions through reciting the exact words he heard in their exact order.  This is evident in his inclusion of even the words of God which were directed specifically to him, for example: “Qul” (“Say [to the people, O Muhammad]”).  The Quran’s rhythmic style and eloquent expression make it easy to memorize.  Indeed, God describes this as one of its essential qualities for preservation and remembrance (Q. 44:58; 54:17, 22, 32, 40), particularly in an Arab society which prided itself on orations of lengthy pieces of poetry.  Michael Zwettler notes that:

“in ancient times, when writing was scarcely used, memory and oral transmission was exercised and strengthened to a degree now almost unknown.”[2]

Large portions of the revelation were thus easily memorized by a large number of people in the community of the Prophet.

The Prophet encouraged his Companions to learn each verse that was revealed and transmit it to others.[3]  The Quran was also required to be recited regularly as an act of worship, especially during the daily meditative prayers (salah).  Through these means, many repeatedly heard passages from the revelation recited to them, memorized them and used them in prayer.  The entire Quran was memorized verbatim (word for word) by some of the Prophet’s Companions.  Among them were Zaid ibn Thabit, Ubayy ibn Ka’b, Muadh ibn Jabal, and Abu Zaid.[4]

Not only were the words of the Quran memorized, but also their pronunciation, later which formed into a science in itself called Tajweed.  This science meticulously elucidates how each letter is to be pronounced, as well as the word as a whole, both in context of other letters and words.  Today, we can find people of all different languages able to recite the Quran as if they are Arabs themselves, living during the time of the Prophet.

Furthermore, the sequence or order of the Quran was arranged by the Prophet himself and was also well-known to the Companions.[5]  Each Ramadan, the Prophet would repeat after the angel Gabriel (reciting) the entire Quran in its exact order as far as it had been revealed, while in the presence of a number of his Companions.[6]  In the year of his death, he recited it twice.[7]  Thereby, the order of verses in each chapter and the order of the chapters became reinforced in the memories of each of the Companions present.

As the Companions spread out to various provinces with different populations, they took their recitations with them in order to instruct others.[8]  In this way, the same Quran became widely retained in the memories of many people across vast and diverse areas of land.

Indeed, memorization of the Quran emerged into a continuous tradition across the centuries, with centers/schools for memorization being established across the Muslim world.[9]  In these schools, students learn and memorize the Quran along with its Tajweed, at the feet of a master who in turn acquired the knowledge from his teacher, an ‘un-broken chain’ going all the way back to the Prophet of God.  The process usually takes 3-6 years.  After mastery is achieved and the recitation checked for lack of errors, a person is granted a formal license (ijaza) certifying he has mastered the rules of recitation and can now recite the Quran the way it was recited by Muhammad, the Prophet of God. 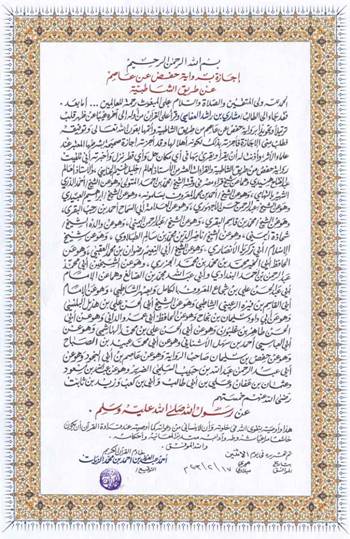 The image is a typical license (ijaza) issued at the end of perfecting Quran recitation certifying a reciter’s unbroken chain of instructors going back to the Prophet of Islam.  The above image is the ijaza certificate of Qari Mishari ibn Rashid al-Afasy, well known reciter from Kuwait, issued by Sheikh Ahmad al-Ziyyat.  Image courtesy of (https://www.alafasy.com.)

“For Muslims the Quran is much more than scripture or sacred literature in the usual Western sense.  Its primary significance for the vast majority through the centuries has been in its oral form, the form in which it first appeared, as the “recitation” chanted by Muhammad to his followers over a period of about twenty years… The revelations were memorized by some of Muhammad’s followers during his lifetime, and the oral tradition that was thus established has had a continuous history ever since, in some ways independent of, and superior to, the written Quran… Through the centuries the oral tradition of the entire Quran has been maintained by the professional reciters (qurraa).  Until recently, the significance of the recited Quran has seldom been fully appreciated in the West.”[10]

The Quran is perhaps the only book, religious or secular, that has been memorized completely by millions of people.[11]  Leading orientalist Kenneth Cragg reflects that:

“…this phenomenon of Quranic recital means that the text has traversed the centuries in an unbroken living sequence of devotion.  It cannot, therefore, be handled as an antiquarian thing, nor as a historical document out of a distant past.  The fact of hifdh (Quranic memorization) has made the Quran a present possession through all the lapse of Muslim time and given it a human currency in every generation, never allowing its relegation to a bare authority for reference alone.”[12]

[10] The Encyclopedia of Islam, ‘The Quran in Muslim Life and Thought.’